With primeval forests, rocky crags and rushing streams, Zhangjiajie is a sublimely beautiful place to explore nature's bounty. Being one of the three parts of Wulingyuan Scenic Area, Zhangjiajie National Forest Park is the first national park of China which was approved by the State Council in 1982. Original vegetation still covers 60% of the park and includes some 550 different species of trees, some highlights include rare dove trees, ginkos and dawn redwoods, which were, until 1948, believed to be extinct. Highly prized medicinal herbs used in Chinese traditional medicine spring from the valley floor and grow on the high peaks.

★ Main Scenic Spots
Yellow Stone Village is the largest viewing platform of Zhangjiajie. At an elevation of 1300 m, the platform can provide an overall  panorama of the whole Park. A common  saying goes that: “it is no avail of you trip  to  Zhangjiajie, unless you come to the summit of Yellow Stone Village.” There are various concentrate spots along the Yellow  Stone Village tour line when you are hiking up,such as the Treasure Case of Heavenly Books, the Magic Sea-suppressing Needle, the Southern Pillar of Heaven, the Front  Garden, and the Golden Tortoise Watching  the Sea, etc.Tourists can start from the front gate to climb to Yellow Stone Village, and it takes nearly 90 minutes to the summit; or you can take Yellow Stone Village cablecar which takes you 8 minutes to reach the summit.
After hiking up the mountain,the summit’s fresh air can not only invigorates your lungs but also rejuvenates your skin.To complete the three kilometers tour takes about two hours. Along the way, numerous fantastic scenes meet the hikers in quick succession: Six Wonders Pavilion, Pick-up Star Paltform, Five Fingers Peaks, Front Garden, Echo Wall, Heicongnao, Remaining Piers of the Heavenly Bridge, Clouds Drifting Cave, Golden Turtle in the Clouds Sea and so on.
■Time needed: 2 hours
■The ticket of cablecar: 65RMB/PAX for a single way, 118RMB/PAX for a round way.
■Avoid the crowds: Yellow Stone Village is not crowded through out the whole year except some holidays such as Labor Day, Chinese National Holiday from Oct 1-7.

Golden Whip Stream is one of the most beautiful valleys in the world. It is about 7.5km long and 30-50m wide, with the average height of peaks on both sides up to 300-500m. Golden Whip Stream is like a blue silk ribbon around the matchless beauty-Zhangjiajie, which displays the beauty of “3000 strange peaks and eight hundred fine waters’ to the utmost. Golden Whip Rock is one of the highlight scenic spots in this beautiful valley. The Golden whip Stream is named  because it always runs past the Golden Whip Rock. This rock is 378m high, just square, thicker in the power part, sharptopped, and with clear corners and edges on its four sides. It resembles a lifted steel whip, directly pointing into sky, making people watch it with awe. The stone structure is that of red quartz sandstone and limestone, which, in the sunshine, illuminates golden lights, and hence name it Golden Whip Rock. Golden Whip Rock is the highest, steepest and most magnificent stone peak in the scenic area of Zhangjiajie. As people praise,” Everywhere you can see famous mountains and great rivers, only Golden Whip Rock is the most marvelous of all the marvelous."
■ Time needed: 2-3 hours
■ The ticket of cablecar: No cablecar
■ Avoid the crowds: It is an easy and relaxing walk along the stream

Yaozi Fort faces the Yellow Stone Village. It’s one of the three important scenic spots in Zhangjiajie National Forest Park.Yaozi Fork is a little-visited mountain in Zhangjiajie National Forest Park, which is quiet and has fantastic scenery, there are more than 5000 steps to climb up and no cablecars and elevators to transport you to the summit. so it is very popular with hiking lovers. Yaozi Fork was first opened to tourists in the 1980's. It was closed for nearly a dozen years out of concern for environmental protection, but then reopened to welcome visitors once again on September 26, 2003. After 4 hours to tour the village, then hike down and arrive in Golden Whip Stream. Although less tourists of group tour visit there, it’s a best place for trekking tour.
■Time needed: Half day
■The ticket of cablecar: No cablecar
■Avoid the crowds: a classic off-the-beaten-track place in Zhangjiajie National Forest Park

Yuanjiajie is one of the classic tour routes in Zhangjiajie, which is a natural platform that faces giant rocks rising from deep valleys and surrounded by higher mountains. It only takes you less than 3 minutes by Bailong Elevator up Yuanjiajie, Bailong Elevator is said to be the world's tallest full-exposure outdoor lift, tallest double-deck sightseeing elevator. Unique in their shapes and covered with pine trees, these rocks resemble a vivid Chinese painting. Yuanjiajie is also the inspiration for Hallelujah Mountain in movie AVATAR. Hallelujah Mountain is the highlight of Yuanjaijie, the peak is formerly named the South Sky Pillar which is 1,074 meters above the sea level and one of more than 3,000 mountains in the Yuanjiajie Scenic Spot. In 2008, Hollywood photographers spent four days shooting Zhangjiajie. His pictures became the prototypes for many elements in “Avatar”. The pictures inspired the movie director James Cameron to feature the floating “Mt. Hallelujah” in the world of “Pandora”. In 2009, the peak renamed Avatar Hallelujha Mountain.
■ Time needed: 3 hours
■ The ticket of elevator : 72RMB/PAX for a single way
■ Avoid the crowds: take Bailong Elevator in the afternoon or hiking up from Luanchuanpo( in the middle of Golden Whip Stream)

Yangjiajie Scenic Area borders Yellow Stone Village, Pipaxi Scenic area on the southeast and neighbours Tianzi Mountain on the north, consisting of 3 small scenic areas: Xiangzixi, Longquan Gorge, Monkey Valley. Up to now Xiangzixi scenic area has been developed into a key one, which includes Wulong Village,Tianbo Mansion, One Step to Heaven.The Air Corridor and the natural “Great Wall”, especially the natural “ Great Wall” is the most striking feature of the area. You will be completely conquered by this spectacle and stunned by the uncanny craftsmanship of nature! Now Yangjiajie becomes one of the must visit places in Zhangjiajie, especially after Yangjiajie Cablecar completed in 2015，more and more visitors go to this place and enjoy the spectacular beauty.
■ Time needed: Half day
■ The ticket of cablecar : 76RMB/PAX for a single way
■ Avoid the crowds: A less-crowded scenic spot in the park or you can hiking up from the entrance of Yangjiajie

Tianzi Mountain (also called Son of Heaven's Mountain) Nature Borders on the Suo Stream Vally on the east and the Zhangjiajie National Forest Park on the south, boasting a scenic area of 67 k㎡. Standing loftily in Wulingyuan, it presents a full view of the surrounding myriad of peaks and abysses. Scattered in its six sections are one" celestial bridge", two" heavenly pools", three ancient temples, four" gates to heaven", five waterfalls, six caverns and eighty-four lofty natural terrace for sightseeing.It is a fantastic combination of magnificence, gortesqueness, perliousness, gracefulness, tranquility and wilderness, with the forest of pinnacles, the sea of clouds, the splendid sunrise and virgin snow in winter as the four woners.
■ Time needed: Half day
■ The ticket of cablecar : 72RMB/PAX for a single way
■ Avoid the crowds: Take shuttle bus to arrive in Tianzi Mountain entrance, then ride tourist bus up Tianzi Mountain

★ When to visit it
Almost any time of the year is good for visiting Zhangjiajie National Forest Park. Though winter can be cold, snowfall turns the reserve into a winter wonderland. The dense foliage and high elevation make the hot Chinese summers tolerable. As with any temperature zone, spring is filled with blossoms and fresh scents while autumn's riot of color is borne through the changing colors of the leaves. April, May, June, September and October are the golden time to visit Zhangjiajie National Forest Park.

★ The Entrances of Zhangjiajie National Forest Park
■Wulingyuan Entrance: this is the biggest entrance of this park, located in Wulingyuan downtown, it has a good location to hotels and most visitors will enter the park from here, you can go to Tianzi Mountain, Yuanjiajie and Ten-Miles Gallery.
■Zhangjiajie National Forest Park Entrance: There are shuttle buses you can take from Zhangjiajie City to reach it, the entrance is near to Yellow Stone Village, Yaozi Fork and Golden Whip Stream.
■Tianzi Mountain Entrance: Fewer visitors know this entrance, where is less crowded and you can take shuttle bus to reach Tianzi Mountain.
■Yangjiajie Entrance: A newly opened entrance, you can take Yangjiajie Cablecar to visit Yangjiajie.

★ Admission Fee （Note: discounted tickets only for students with student card and under 24 years old ）

★ Where to stay in the park
There are a lot of hostels operated by local people in the park, the facilities in the hostels are simple but clean, most hostels are closed in winter for lacking water on the top of mountain.
■Dingxiangrong Downtown: Most visitors choose to stay in this downtown for it has good location to most scenic spots, especially when you want to watch the sunrise in the park, Dingxiangrong is your best choice. This downtown is near to the Grand Sightseeing Platform
which is one of the best place for sunrise.
■Tianzi Mountain: The farmers’ guesthouses here can be quite rudimentary.

★ Restaurant
There are only small restaurants scattered around each scenic area, which serves simple local food. Your guide will choose the best available restaurant based on your requirements. If you can eat at a restaurant close to the attraction you are visiting, you won’t need to waste time in walking.
Alternatively we can arrange a picnic lunch for you if you don’t want to eat at a local restaurant. We will ask your hotel to pack a lunch box for you. And there is a McDonald's at Tianzi Mountain and a KFC in Yuanjiajie. Local villages sell food like corn, fruit, and cucumber on the mountain, and there are small snack stalls selling water and snacks.

★ Best Places to watch Sunrise and Sunset in the park
■ Sunrise
Locations:The Grand Sightseeing Platform, Laowu Chang which is also called 'Old House Area', Tianzi Mountain Cablecar Station.
Where to stay: Dingxiangrong Downtown and Tianzi Mountain Village.
How to Go:You can go to The Grand Sightseeing Platform to watch sunrise on foot if you stay in Dingxiangrong Downtown, it only takes you 15 minutes; You have to hire a private bus to Laowuchang, 30 minutes bus riding, around 200RMB for the whole trip.

■ Sunset
Locations:Yangjiajie, Yuanjiajie.
Where to stay: Dingxiangrong Downtown or Yuanjiajie Village.
How to go: Take tourism bus to arrive in Yangjiajie.

Detailed Sunrise and Sunset Time for your Reference, please check the following chart. 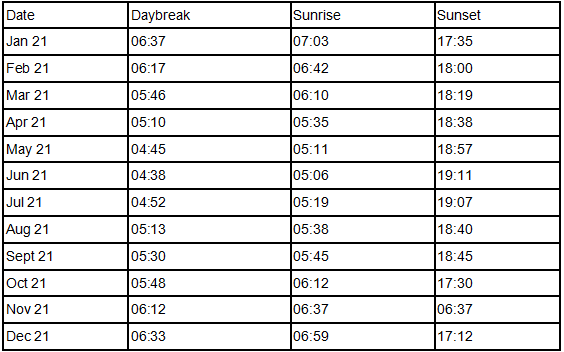 (Please Note: the above sunrise and sunset time are for your reference，to know the exact time of your travel date, please feel free to ask details from your tour guide or know it in the hotel)

■Highly density. In the Tianzi Mountain of 83 square kilometers there are 3106 sandstone columns of different sizes. The average density is 37 columns in every square kilometer, which is extremely high in the world. Sandstone columns are as bamboo shoots after a spring rain, especially in the deep valleys of the Geopark. Along the Golden Whip Stream is about 15 km long, standing over 400 sandstone columns on both sides of the River and forming a wonderful scenery of “ one step a scene, ten steps a new world”. This is also the most beautiful and most magnificent place in the Zhangjiajie scenic area, where both famous Golden Whip Rock and Candle Peak situated at.